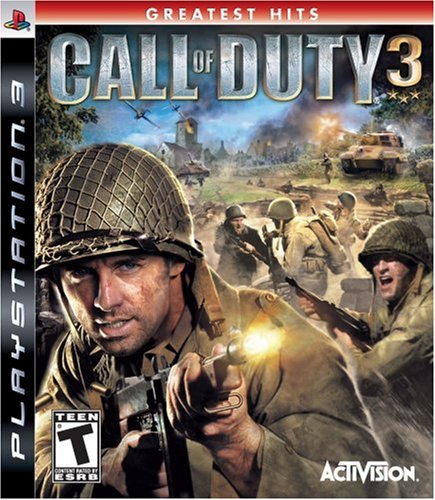 Call of Duty 3 takes full advantage of next-generation technology and a new physics engine to deliver a living battlefield. In the ultimate character-driven experience through a continuous and compelling story of bravery, loyalty and teamwork, players step into the shoes of four ordinary soldiers to fight through The Normandy Breakout, the historic campaign that led to the liberation of Paris and brought the Allies onto the doorsteps of victory. In Call of Duty 3, multiplayer fans have more tools in their arsenal: commandeer multiple-occupancy vehicles, mantle tanks, plant anti-personnel mines in strategic areas and rank-up to maximize the strength of your special class ability. *DLC (Downloadable Content) may not be included and is not guaranteed to work*

Call of Duty 3 delivers the intensity of being closer than ever to the fury of combat during the Normandy Breakout, the historic campaign that made the liberation of Paris possible and brought the Allies a step closer to Berlin. With advanced high-definition graphics, detailed character animations, and explosive on-screen action, Call of Duty 3 delivers the most immersive and cinematically intense war experience to date.

Game Storyline
Through a seamless narrative that delivers the rush of unrelenting battle and breathtaking action, players assume the roles of four ordinary Allied soldiers; American, British, Canadian and Polish, and are thrust onto an authentic, living battlefield for an unprecedented variety of combat situations, as the campaign to liberate Paris ensues.

Each unique mission path requires special tactics, from sniping and demolition, to all-out head-on clashes, providing for a truly organic game that is never the same twice. There's also a new multiplayer mode that allows for combined arms and team-based combat.

"p" Gameplay is further enhanced by the incredible graphics power of the PlayStation 3. You'll experience photo-realistic graphics and fast, smooth action that makes the experience of battle all the more immersive.

Multiplayer
The multiplayer mode provides unprecedented depth and variety by allowing up to 16 players to battle it out online with the option of single or split-screen Internet play. Gamers have the choice to play as infantry or commandeer multiple-occupancy vehicles, including tanks, jeeps, and motorcycles with side-cars, leading to unique mobile combat roles for all-out, multiplayer mayhem.

Call of Duty 3 also offers soldier classes, each with class specific abilities, and a ranking system for truly diversified squad combat, and hours of multiplayer, and single player fun.

Hold On Let Me Overthink This | Hook and Loop Attach for Hats, J

Advertisements fund this website to provide you with free, quality journalism. Please disable your adblocking software or whitelist our website. Thank You!